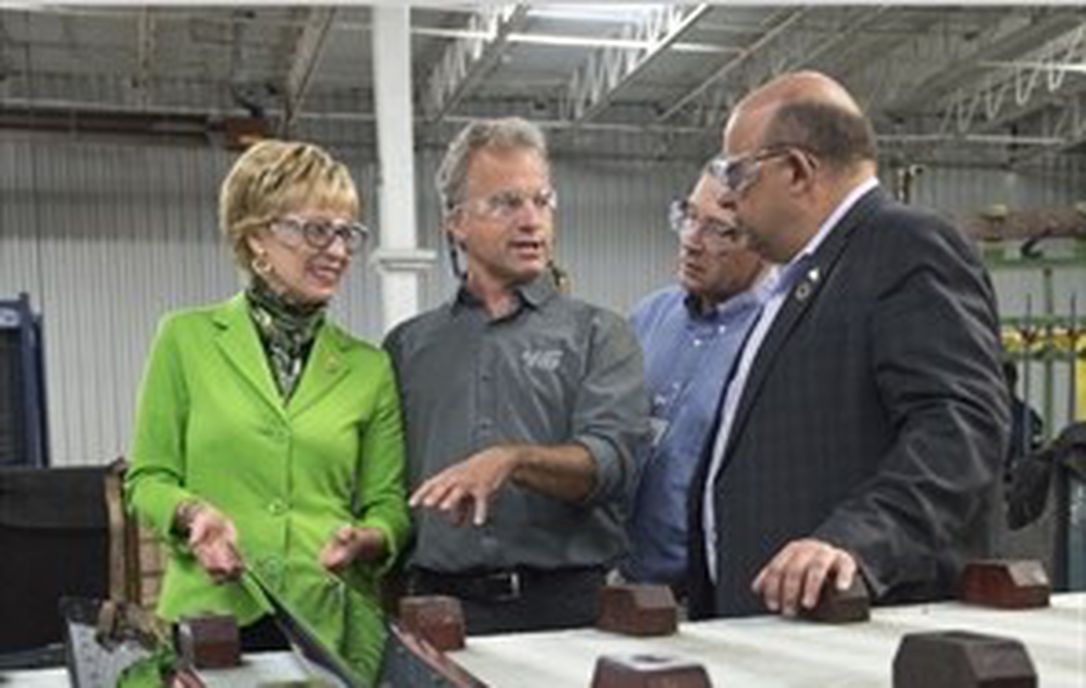 Read the full article on The Record

KITCHENER –Kuntz Electroplating Inc. is spending $10.8 million on a new plating line and more automated carts to carry parts around its plant.

“How do you compete with that? The answer lies in being more innovative than the competition, using better technology and being more productive.”

The company chrome-plates aluminum parts for motorcycles, trucks and cars. The grant from the Southwestern Ontario Development Fund will be used to help build a new plating line so it can also do steel parts, and buy more automated carts that carry parts to and from the line.

Just over 400 people work in the sprawling plant at 851 Wilson Ave., and another 25 will be hired when the new line is completed in August 2020, the company said.

The family-owned business, which turns 70 next year, counts Harley-Davidson, Honda, Mercedes, Toyota, BMW and Jaguar among its customers.

Inside the plant now there are about 12 automatic-guided vehicles that follow a magnetic strip on the cement floor. They carry parts to and from the plating line. More of those machines will be used on the new line that is now being constructed.

It is increasingly difficult to maintain a manufacturing operation in Ontario, and Kuntz Electroplating has resisted calls from its customers and suppliers to move the plant to lower wage jurisdictions in the United States, Mexico and China, said company president Robert Kuntz.

“That’s why it is critically important provincial governments in Canada step up with every possible tool to lessen the competitive disadvantage that manufacturers up here are faced with every day,” he said.

The investments in the Wilson Avenue plant will make the new plating line there one of the largest and most efficient in the world, said Kuntz.

It allows chrome plating of exterior automotive parts in volumes that no other metal finisher in North America can match, he said.

The provincial grant was announced as talks are underway in Washington to renegotiate the North American Free Trade Agreement. About half of North American auto-sector jobs are now in Mexico as a result of that agreement, and U.S. President Donald Trump wants the agreement changed.

The U.S. has indicated that it wants to change the rules of origin in the auto sector, requiring higher U.S. content in vehicles sold in the U.S. The current rule of origin calls for 62.5 per cent of a car’s parts to be made in North America.

Kuntz Electroplating does not believe it will be directly impacted by the NAFTA negotiations.

“It’s not like there are any other electroplaters in the U.S. who could suddenly start doing the volumes of products that we do,” said Kuntz.

Kuntz Electroplating does not, for the most part, make the parts that it finishes.

“They are made in the United States, primarily, and they are shipped over the border for processing and finishing by us, and then they go back,” said Kuntz.

“Since we are providing a service I am not sure we would necessarily be included in the discussions about American-versus-Canadian-versus-Mexican content in vehicles that is being discussed right now,” said Kuntz.

His grandfather, Oscar Kuntz, started the company in his garage in 1948. In 1965, it moved to Wilson Avenue and, after several expansions, it has about 400,000 square feet of space on the property.